Prince Charles calls for an end to “throw-away” clothing 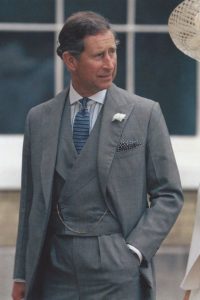 The dapper Prince of Wales has called for an end to the “extraordinary trend of throw-away clothing”.

Prince Charles – who has a fine wardrobe of classic English style – told Vogue magazine he has his clothes mended rather than discard them.

He said: “I happen to be one of those people who’d gets shoes – or any item of clothing – repaired if I can, rather than just throw it away.

“When I was a child, we used to take our shoes down to the cobbler in Scotland and would watch with fascination as he ripped the soles off and then put new soles on.”

The Prince is pushing to encourage everyone to think about what they buy and how clothes are made.

The fashion industry has been accused of making cheap Third World manufactured clothes that are worn once or twice and then thrown away.

And, young buyers are complicit in the instant throw away trend.