Three teenage boys rescued from a tumble dryer by fire-fighters 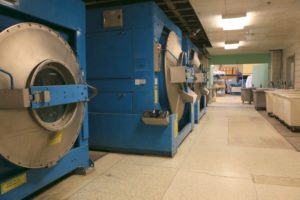 Three teenagers had to be rescued by the fire brigade after becoming stuck in a tumble dryer.

They were trapped after crawling into the industrial size machine on a disused laundry site.

Two managed to clamber into the machine but a third found himself in difficulties when his ankles were trapped.

Essex County Fire and Rescue Service (ECFRS) joined forces with the police, a helicopter rescue team, and the ambulance service to free them.

After using a range of heavy equipment, the trapped teenager was eased into the dryer to join his mates.

The door was then removed to allow all three a way out.

“It was a difficult site to access and we had to carry a lot of heavy equipment a large distance from the appliances to the tumble dryer and then use our expertise to free the men safely.

“We used a range of equipment to free the casualty’s ankles and allow him to crawl into the tumble dryer.

The ambulance team gave him pain relief and we then managed to move the door, again using a range of equipment, so the men could crawl out.”

The teenagers were left in the care of ambulance officers.