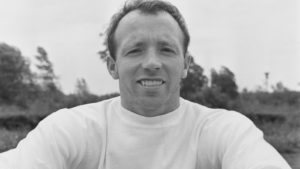 England World Cup winner Nobby Stiles has died at the age of 78.

The “hard as nails” defender was a key player in the 1966 squad managed by Sir Alf Ramsey.

Stiles was also in the Manchester United side which became the first English club to win the European Cup two years later.

A statement issued by the Stiles family read:

“The Stiles family are sad to announce that Nobby Stiles passed away peacefully today surrounded by his family after a long illness.

“The family kindly ask for privacy at this sad time.”