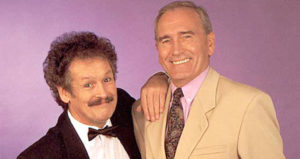 He had recently tested positive for Covid-19.

Ball – real name Robert Harper – was a mainstay of television light entertaining during the 80s.

He also acted in “Last of the summer wine” and “Heartbeat”.

A statement from the comic’s family and stage partner Tommy Cannon, said he died at the Blackpool Victoria Hospital after a battle with Covid-19.

It added: “It is with great personal sadness that on behalf of Yvonne Ball, and the family, and Tommy Cannon, I announce that Bobby Ball passed away at Blackpool Victoria Hospital on the 28th October 2020 approximately 21:30.

“Bobby had been taken to the hospital for tests as he started with breathing problems.

“At first it was thought to be a chest infection, but a test proved positive for Covid-19.”

“His wife Yvonne said the hospital and staff could not have been more wonderful, as they were outstanding in their care of duty and they did everything possible for him and she cannot praise them enough.

Yvonne added: “I will always miss him, he was so joyful, full of fun and mischievous.”

His former partner Tommy Cannon said he was “devastated” by the news.

He said: “Rock on, my good friend, I can’t believe this, I’m devastated.”

Ball’s manager Phil Dale said he was a “true comedy star who loved entertaining people and he loved life itself.

“I spoke to him every day and it would always end in laughter.”