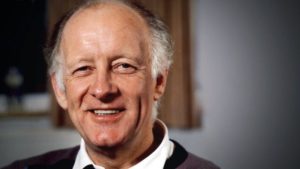 BBC presenter Frank Bough – the face of Grandstand – has died. He was aged 87.

Bough was one of Britain’s best known – and loved – television host.

He was an Oxford soccer Blue and hosted six World Cups and six Olympic Games.

And he was part of the launch team for BBC’s Breakfast TV in 1983.

He was renowned for his calm as a live presenter.

His BBC career – spanning the 60s – 80s – came to an end following a sex and drugs scandal story published in the now defunct News of the World.

He said his behaviour had been “exceedingly stupid”.

“Frank excelled as a live presenter with the BBC for many years and we are very sorry to hear of his passing.

“We send our condolences to his family and friends.”

Good Morning Britain host Piers Morgan – a former editor of the News of the World – said:

“His career was ruined by scandal, but he was one of the great live TV presenters.

Bough, who died in a care home, also worked for SKY and ITV.