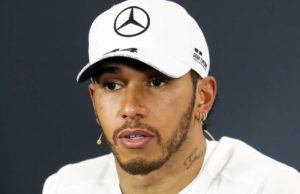 Lewis Hamilton has broken the Formula 1 record of most Grand Prix victories.

He won the Portuguese Grand Prix to give him his 92nd chequered flag – breaking Michael Schumacher’s record.

He took the lead in the 20th lap and dominated the race from that point.

The British driver was given a standing ovation before celebrating with his Mercedes team mates and his father, Anthony.

He added: “I could only ever have dreamed of being where I am today.

“I didn’t have a magic ball when I chose to come to this team and partner with these great people, but here I am.

“Everything we do together – we are all rowing in the same direction and that’s why we’re doing what we’re doing.

“And my dad’s here and my step mum Linda, and Roscoe [Hamilton’s dog].

“It is going to take some time for it to fully sink in.

“I was still pushing flat out as I came across the line.

“I can’t find the words at the moment.”