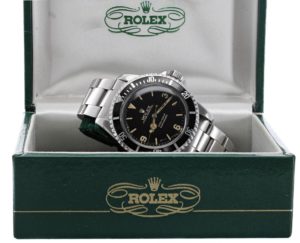 The Submariner 5512 was made briefly in the early 60s and few survive.

The watch – which has a rare “3-6-9” dial – was sold by the miner’s daughter and husband at auction.

It also had its original box, paperwork, and service certificates.

It was bought by a buyer from the Far East.

“This is the holy grail of vintage watches.

“There are so few of these left in their original condition that they command very high prices and are sought after by collectors all over the world.

“This particular watch has a version of the dial that experts call a ‘Crown-62’ variation, which makes it even rarer.”

After the auction in Wiltshire the sellers said they were in a “state of disbelief”.

“Having worked all our lives to be able to enjoy retirement, this will give my wife and I the added financial security we’ve dreamt of.

“I imagine you’d feel like this if you had a big win on the premium bonds.”

The original owner moved from London to Mansfield in Nottinghamshire during WWII.

He worked in the mines as a “Bevin Boy”.

After later becoming a bus driver, he returned to Shirebrook Colliery as a medical attendant.

The family wishes to remain anonymous.