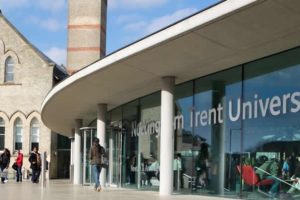 Four students have been fined £10,000 each after holding a house party.

Police found more than 30 guests hiding in kitchen cupboards, bedrooms and the basement when they went to the house in Lenton, Nottingham.

The students accused the police of “spoiling their fun” – adding “we should be having the time of our lives.”

They were asked to end the party but didn’t.

Nottingham currently has one of Britain’s highest rates of coronavirus infections.

The four students have been suspended from Nottingham Trent University.

“This needs to stop.

“The claims that police presented as a barrier to the students’ fun are astounding.

“How many fines do we have to give before the message is understood?

“We do not take pleasure in handing out fines and would much rather be in a situation where students could enjoy themselves, but the reality is that if people do not follow the Covid-19 restrictions, more people will die.

“The majority of students are following the rules but there obviously is a significant number of them who feel as though they can show blatant disregard for the safety of those around them.

“We have demonstrated that we will take action where necessary.

“I’d like to thank the community protection officers for spotting the party and engaging with the occupants at the house in Lenton last night.”

A person can be fined £10,000 for “facilitating or organising” parties.

“The students were given the opportunity for the situation to end with a warning, but instead decided it was appropriate to lie to officers.

“This behaviour will not be tolerated, and I urge those who are considering to host parties to think again.”

“On receipt of that notification we immediately launched an investigation, and each student has been suspended pending the outcome of our investigation.

“Any student who is found to have breached our disciplinary regulations can face a range of sanctions, up to and including expulsion.

“We have repeatedly made clear to all students that they, like everyone, have a crucial role to play in limiting the spread of this virus.

“We will not tolerate any breaches, and where we have evidence of any breaches, we will always take immediate action under our disciplinary processes.”