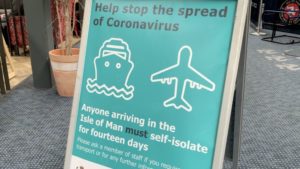 A man has been jailed for six weeks after nipping out for a McDonald’s with his mates.

Jake Waring, 20, admitted not following the self-isolation rules imposed on the Isle of Man.

Visitors must quarantine for 14 days after arriving on the island.

Waring, from Birkenhead, was visiting relatives on the Isle of Man.

When he arrived at the ferry terminal port staff told him of the isolation rules.

However, two days later he left his address and met up with friends for a McDonald’s.

They then visited a petrol station.

A member of the public reported him to the police.

Waring argued in at the Douglas Court House that he’d “forgotten” to self-isolate.

He thought the island’s rules were the same as those in Liverpool.

The prosecution said there was “no doubt” he had a “full understanding” of the rules.

High Bailiff Jayne Hughes said people on the island were “extremely lucky” to have the current freedoms they do and that was down to the “strict rules” imposed on new arrivals.

She said Waring’s actions had “posed a very real risk” to those he had come into contact with and the sentence would send a “clear message” that anyone breaking the law would face jail.