Gary Lineker caught in M&S dessert aisle without a mask 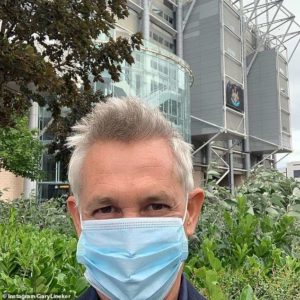 Gary Lineker has blamed “old age” for shopping in M&S without wearing a mask.

Lineker – the 59-year-old Match of the Day presenter – was snapped in the dessert aisle.

The former England captain and striker had previously criticised “snowflakes” for refusing to cover their faces during the coronavirus pandemic.

“In my old age, I went into a store and forgot to put my mask on.

“Was wondering why people were giving me daggers.

“Realised after a couple of minutes and hastily put it on.

“Apologies to those present.”

“How can there be any debate about whether we should be wearing a mask?

“Even if it’s only a one percent chance of making you safer.

“Even if it is only a one percent chance of stopping you giving it to someone else.

“Even if it only saves one life then it has to be beneficial.”

And he later posted:

“Why would anyone object to wearing a mask in a shop?

“Not exactly a hardship.

“What a country of snowflakes we’ve become.”

The shopper who shopped Lineker for not wearing a mask, told The Sun:

‘It’s just hypocrisy on another level.

“He had even tweeted a photo of him wearing a mask recently in front of that same M&S store and told people to wear masks in supermarkets.

“If it was anyone else, I wouldn’t mind so much.”

“But it’s frustrating for someone who tries to take the moral high ground as much as he does.”