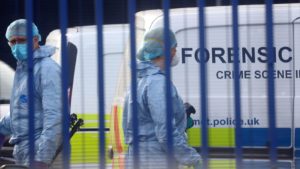 A policeman has been shot dead at a custody centre in south London.

The officer – said to be nearing retirement – was fired at by a man under arrest.

It is believed the policeman was taking the suspect’s temperature as part of the Covid-19 precautions.

A 23-year-old suspect was taken to hospital with a gunshot injury.

It’s understood he turned the weapon on himself.

The policeman has been described as “well-liked, a good copper, reliable”.

“This is a truly shocking incident in which one of our colleagues has lost his life in the most tragic circumstances.

“My heart goes out to his family, direct colleagues and friends.

“We are in the early stages of the investigation and are still working to establish the circumstances surrounding the incident and we will provide further updates when we have them.” 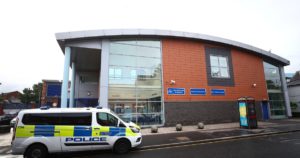 “As far as I can piece together, the suspect was arrested in the early hours in Croydon.

“He’d been stopped and searched by two special police constables.

“I understand that they found some ammunition – maybe only one bit of ammunition on him – so that was enough to arrest him.

“He was then put into a police car, or more likely a police van with a cage for prisoners.

“But for some reason, I’m told he wasn’t hand-cuffed.

“He was brought here to Croydon, and at around two o’clock this morning, he was taken into the custody suite and put into a holding cell which is normal procedure.

“At one point, the officer who died, opened the door to the cell to do two things.

“To get personal details of the suspect, but also to go through some COVID-19 procedures, which are mandatory for anybody who’s brought into the custody suite.

“And it was at that point that the weapon was produced by the suspect and fired at the officer.”

It said: My deepest condolences go to the family, friends and colleagues of the police officer who was killed in Croydon last night.

“We owe a huge debt to those who risk their own lives to keep us safe.”

“I am deeply shocked and saddened to learn that a Metropolitan Police Officer has been shot and killed in the line of duty.

“My thoughts today are with his family, friends and policing colleagues in London and across the country.

“This is a sad day for our country and another terrible reminder of how our police officers put themselves in danger each and every day to keep the rest of us safe.”

The incident has been referred to the Independent Office for Police Conduct who will investigate.

Policing Minister Kit Malthouse made an announcement in the Commons about the death.

He said: “We ask our police officers to do an extraordinary job.

“The fact that one of them has fallen in the line of performing that duty is a tragedy for the entire nation.

“I know the entire House will offer their condolences to his family and friends and colleagues.

“May he rest in peace and may justice follow this heinous crime.”