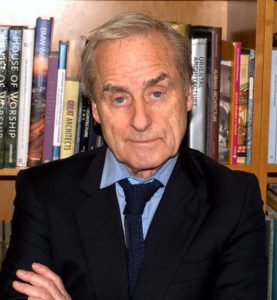 The news was announced by his wife, author and journalist Tina Brown.

The couple had been married for more than 40 years.

Sir Harold was the pioneering editor of the Sunday Times.

His final role was as editor-at-large for Reuters.

One of his team’s greatest exposés was the forgotten plight of British thalidomide children who were not compensated for their birth defects.

Sir Harold was born in Manchester in 1928.

He started out as a reporter on his local paper aged 16.

He left a year later after disagreeing with Mr Murdoch over editorial independence.

He said journalism was his “basic passion”.

He believed in accurate, truthful reporting.

He added: “Journalism is not easy. It’s the first rough draft.

“I don’t think you need to wait around until you have the definitive thing.

“You record what’s there; don’t delude yourself that this is the ultimate historical view.

“Attempting to get at truth means rejecting stereotypes and cliches.”

Among the many tributes Piers Morgan described Sir Harold as a “witty, charming, fiercely intelligent man”.

“He was a giant of investigative journalism – uncovering great injustices and informing the public without fear or favour.”