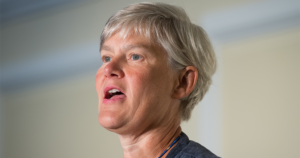 Ms Green said Labour should not “let a good crisis go to waste”.

She encouraged activists to use the ongoing problems to “bash” the Conservatives.

Speaking at a Labour Connected event, she said:

“I think there’s obviously a real immediate pressure to address these funding needs for the crisis.

“But I think we should use the opportunity, don’t let a good crisis go to waste.

“And I think that particularly for those of us in Labour, let’s be talking now about what this has really exposed, about the way in which we’ve undervalued our whole education system.”

She said: “I know that Kate is really upset about the way that came across.

“She was making the point that we’ve got to now make sure this COVID crisis doesn’t worsen that divide and doesn’t write some children off.”

“It was absolutely the wrong way to express that and Kate knows that.

“I’m sure she will apologise if she hasn’t already.”