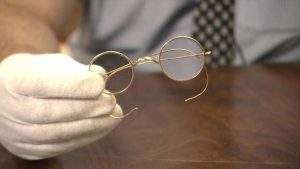 A pair of glasses worn by civil rights campaigner Mahatma Gandhi have been sold for £260,000.

The spectacles had been left in an auction house letterbox with a note simply saying:

“These glasses belonged to Gandhi, give me a call.”

The seller had inherited the glasses from an uncle who worked in South Africa when Gandhi was there.

East Bristol Auctions had estimated the glasses would sell for about £15,000. 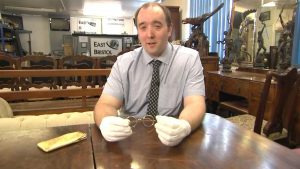 “These are probably the most famous pair of spectacles we’ve ever had, and the most important historical item we’ve found.

“I read the note, carried on with the morning duties, and then around lunchtime I thought, ‘Well let’s give this gentleman a call, let’s see what the story is’.”

“A few hours later, we were digging around and doing some research and we discovered that they are a very important historical find.

“I phoned the gentleman back… his exact words were ‘if they’re no good, just throw them away’. 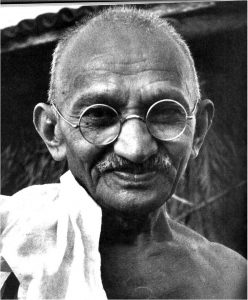 Gandhi led a non-violent protest movement for India’s independence from British rule in 1947.