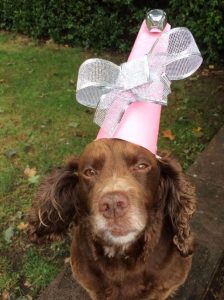 A family dog stolen from a garden kennel was later sold at a car boot sale for £150.

Bisto, a chocolate brown working cocker spaniel, was snatched from her home in Lincoln.

Days later she turned up at the open-air sale 45 miles away.

A kindly lady paid £150 for her because Bisto was chained to a post and “looked sad”.

Bisto’s owners, sisters Laura and Abi Wonnacott, were distraught when they found their dog’s collar in the garden – but no dog. 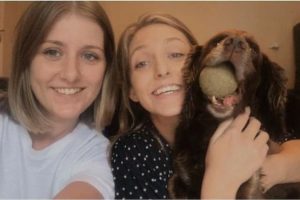 Laura said:  “As time went on, we lost hope and thought we might never see Bisto again.”

Then, after two weeks of searching and posting to social media the girls received a telephone call from a woman in Rotherham, South Yorkshire.

“Bisto was chained to a post and looking sad, so the lady stroked her, and a man said she could have her for £150.

“She bought Bisto – named her Molly and she lived with her home in Rotherham for two weeks.

“The lady’s dad saw our Facebook posts so they called us.”

“My sister Abi took the call and she burst into tears and couldn’t believe it.

“The lady sent photos to confirm it was Bisto while on the call.

“Abi was so overwhelmed that I took the rest of the call and we agreed to meet immediately.

“Bisto is in high spirits.

“She was so happy to be back in the garden and her tail hasn’t stopped wagging.

“She has had plenty of treats and lots of cuddles.”