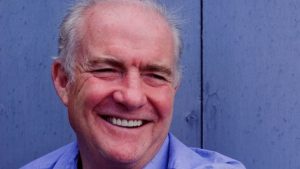 Chef Rick Stein is to make a 15-part series on the culture, history, and food of Cornwall.

The celebrity chef, who owns several restaurants in the region, will film the programme for BBC 2.

“Rick Stein’s Cornwall” will “reveal the county he knows and loves away from the tourist trail”.

Regional fare will inspire his cooking.

Stein said: “Crossing the Tamar for our holidays to Cornwall from Devon was like going into another country.

“And in the car on our way to Padstow we were driving through an enchanted land, capped for my sister and me by seeing the sea at Trevose Head for the first time.

“Now, after so many years of living here, it still does feel different.

“I want to try to explain that difference, to tell you what Cornwall means to me.”

“Wherever in the world Rick takes us on his cultural and culinary explorations is a revelation and this time we’re delighted he’s roaming closer to home to give BBC Two viewers a taste of the real Cornwall.

“Although he made Cornwall his home decades ago, he’s in for a few surprises along the way and viewers can also expect their senses to be piqued as he dives into the county’s rich food heritage.”