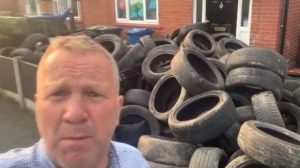 An angry farmer took revenge on a fly-tipper by “returning” the 421 tyres he’d dumped on his land.

Stuart Baldwin had given the alleged tipper three days to clear up the tyres from his farm in Wigan.

When the deadline passed Stuart, 56, loaded up a trailer and left them on the man’s doorstep.

“I got sick of it so I thought I would do a bit back.

“I just thought ‘I’ve had enough of this’.

“Fly-tipping is horrendous – why should farmers put up with it?

“People in the community have called me a legend and a hero.

“Hopefully, people will now think twice now about dumping on our land.”

Footage of Mr Baldwin’s tireless efforts to return the waste was posted online.

The clip shows the tyres being tipped from a truck onto the pavement outside the alleged culprit’s property.

A gang of helpers throw the tyres into the front garden.

A Wigan council spokesman said it was investigating the incident.