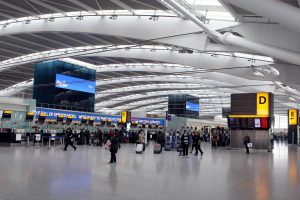 The number of passengers using Heathrow has dropped 89% reveal year-on-year figures for July.

Only 867,000 travelled through the airport last month.

Despite the dramatic drop in numbers Heathrow has seen a rise in footfall.

During June, the year-on-year figure was 95% down.

More than half of the passengers in July were flying to European destinations.

However, Heathrow says 60% of its routes are not flying.

It blames the Government’s quarantine policy for “preventing the UK from travelling to and trading with these countries”.

Airport officials want the 14-day self-isolation requirement to be eased for people who test negative for coronavirus after arriving in the UK.

“Tens of thousands of jobs are being lost because Britain remains cut off from critical markets such as the US, Canada and Singapore.

“The Government can save jobs by introducing testing to cut quarantine from higher-risk countries, while keeping the public safe from a second wave of Covid.”