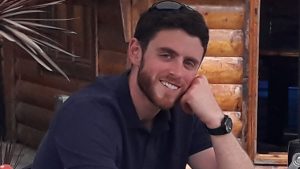 Lissie Harper, the widow of a policeman dragged to his death behind a car, has called for killers of emergency service workers to “spend the rest of their lives in jail”.

Lissie, 28, has launched the campaign with the Police Federation – the coppers’ union.

Her husband Andrew, 28, died after he became entangled in a tow rope fixed to a getaway car.

He suffered “catastrophic injuries” as he was pulled for a mile down country roads.

His killers were sentenced last week at the Old Bailey after being convicted of manslaughter.

They were described in court as “young, unintelligent but professional criminals”.

On the night the officer died the three teenagers were trying to steal a quad bike.

She has called on the “British public and politicians of all parties” to back her campaign.

She said she hoped it would allow people to “get the justice that they rightly deserve”.

“Anyone killing a police officer, firefighter, nurse, doctor or paramedic is jailed for life”.

Manslaughter can carry a life-sentence.

A judge must specify the minimum amount of time to be served.

The trial judge Mr Justice Edis said the sentences for Pc Harper’s killers had to reflect “the seriousness of this case”.

He said: “Sometimes death may be caused by an act of gross carelessness, sometimes it is very close to a case of murder in its seriousness.

Lissie has also written to Prime Minister Boris Johnson asking for a retrial.

But legally, that course of action is highly unlikely.

The Attorney General is also looking at the case to see if the sentences were too lenient.

The Harpers had only been married for a month before Andrew was killed.

Lissie said she had “witnessed first-hand the lenient and insufficient way in which the justice system deals with criminals who take the lives of our emergency workers”.

“The people responsible for wreaking utter despair and grief in all of our lives will spend an inadequate amount of time behind bars,” she said.

“These men who showed no remorse, no guilt or sorrow for taking such an innocent and heroic life away.

“Let’s ensure any widows of the future will not have to experience the same miscarriages of justice.

“Let us finally put in place laws which we can actually be proud of, let us do something about the injustices of our systems that cause so much heartache and utter outrage from us all.”

John Apter, chairman of the Police Federation of England and Wales, said:

“We fully support Lissie and her campaign to seek a change in the law.

“Andrew was brutally killed, leaving his wife, loved ones, colleagues and the nation devastated.

“The killing of a police officer should see those responsible face the rest of their lives in prison.

“This campaign would be Andrew’s legacy and we will continue to support Lissie in her efforts to seek justice and change the law for the greater good.”