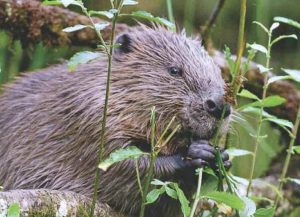 England’s first wild population of beavers can stay in a Devon river, the Government has decided.

The 15 family groups can remain in the River Otter, where they were discovered seven years ago.

The group is the first in more than 400 years to have settled and bred wild.

The beavers – once common place but hunted to extinction – had been threatened with eviction.

But a five-year monitoring trial found their dams brought benefits to the countryside.

Their “beavering away” constructing dams reduced flooding for some at-risk homes.

It also created wetlands for other flora and fauna, improved water quality and brought in tourists.

The project was managed by the Devon Wildlife Trust.

“This is the most ground breaking government decision for England’s wildlife for a generation.

“Beavers are nature’s engineers and have the unrivalled ability to breathe new life into our rivers and wetlands.

“Their benefits will be felt throughout our countryside, by wildlife and people.”

“It’s now vital that decisions are made on the national status of beavers that allows them to be reintroduced into other river systems in England.

“This is vital if we are to see beavers welcomed back into the English landscape after such a long absence.”

“Thanks to the hard work of the Devon Wildlife Trust and their partners, the River Otter beavers reintroduction trial has proven highly successful – improving biodiversity and water quality, mitigating flooding and making the local landscape more resilient to climate change.

“We are firmly committed to providing opportunities to reintroduce formerly native species, such as beavers, where the benefits for the environment, people and the economy are clear.

“But we also understand that there are implications for landowners, and take care to ensure that all potential impacts are carefully considered, and today we can confirm a new government consultation on our national approach and management will open later this year.”