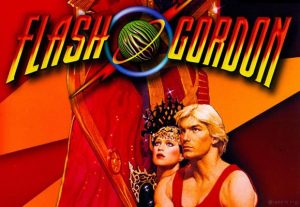 He acknowledges Flash was never going to compete with the Star Wars franchise.

Blessed said it had some great actors, brilliant “eye-popping” visuals and an “absolute banger” of a soundtrack by Queen.

And he delivered the immortal – and oft parried line – “Gordon’s alive!”.

“It’s got a comic style in the writing and in the colour.

The acting’s marvellous, everyone’s very well cast, the music is sensational, the camerawork, the lighting, the whole thing is quite amazing.

“As regards me, the most important thing that ever happened in my life is this expression, “Gordon’s alive!”

“It makes people cheer up. It’s a clarion call to save the planet in a way, and that’s what we’re doing at the moment, we’re trying to save the Earth from all the dreadful things that are going on.”