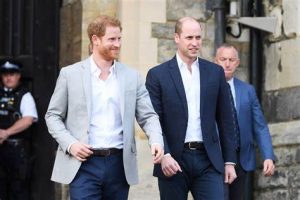 Prince Harry took offence at his brother’s “snobbishness” when he called Meghan Markle “this girl”, claims a new book.

“Take as much time as you need to get to know this girl”.

“Don’t feel you need to rush this.

“Take as much time as you need to get to know this girl.”

It’s said Harry heard “a tone of snobbishness” in the words, “this girl”.

Also, Harry no longer felt he needed to be looked after.

They couple stepped down from their royal duties to forge new careers.

They plan to lead a more independent life and to finance it themselves.

“Finding Freedom” is being serialised in the The Times and Sunday Times.

In one extract source close to Prince William said he was keen to make sure Meghan had the right intentions with Prince Harry.

The source is quoted:

“After all, these are two brothers that have spent their whole lives with people trying to take advantage of them.

“They’ve both developed a radar to detect that type of person, but as William didn’t know a whole lot about Meghan, he wanted to make sure Harry wasn’t blindsided by lust.”

William is said to have sat Harry down and urged him to take things slowly with Meghan.

William advised: “Don’t feel you need to rush this.

“Take as much time as you need to get to know this girl.”