“Lock, Stock…” director Guy Ritchie banned from driving for six months after texting at the wheel while driving 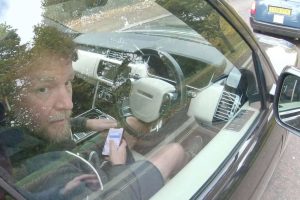 Film director Guy Ritchie has been banned from driving for six months after being filmed using his mobile.

Ritchie, 51, was caught texting on his iPhone by a passing cyclist.

The former husband of Madonna was driving his Range Rover through slow moving traffic in Hyde Park, London.

In the video clip Ritchie realises he is being watched and winds down his window.

He says to the cyclist, “Hello my friend.”

“I don’t think you should be using your text messages while you are driving. I saw you doing it back there as well.”

He then sent the video clip to the police who acted.

“I then crossed to the driver’s side where I saw his iPhone lit up with the classic blue and grey message bubbles of Apple iMessage, with text, and a message in process of being typed but not sent.”

Ritchie – whose films include “Snatch” and “Lock, Stock and Two Smoking Barrels” – already had nine points on his driving licence for speeding offences.

He pleaded guilty in writing to the Hyde Park offence.

Bromley Magistrates’ Court banned him from driving for six months.