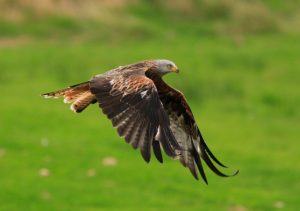 The return of red kites to the skies is a “triumphant comeback” for a bird on the verge of extinction.

It’s been 30 years since environmentalists started work on saving the red kite.

Experts say the success of the scheme may be the “biggest in conservation history”.

Over three decades the red kite population has grown from a mere handful of breeding pairs to ten thousand birds across England.

“Red kites are one of our most majestic birds of prey with a beautiful plumage and are easily recognisable thanks to their soaring flight and mewing call.

“Persecuted to near-extinction, they have made a triumphant comeback in England over the past three decades.

“Thanks to this pioneering reintroduction programme in the Chilterns, increased legal protection and collaboration amongst partners, the red kite stands out as a true conservation success story.”

“In the 1980s, anyone wanting to see a red kite had to make a special pilgrimage to a handful of sites.

“Today it is a daily sight for millions of people.

“In a few short decades we have taken a species from the brink of extinction, to the UK being home to almost 10% of the entire world population.

“It might be the biggest species success story in UK conservation history.”

The red kite is a large bird of prey that mainly feeds on carrion.

It was once common, but persecution and egg collectors saw the majestic kite become extinct in England and Scotland by the 20th Century.

Only a pocket remained in Wales.

To kick-start the reintroduction, 13 young red kites were brought in from Spain and released in The Chilterns in July 1990.