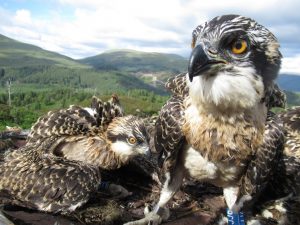 Three Osprey chicks have been named by the public.

The birds are nesting at Loch Arkaig in the Highlands.

Thousands of suggestions were made on-line by the public and Woodland Trust Scotland went for:

“When it came to naming the chicks, people wanted to honour these individuals who for different reasons have all been prominent in the public consciousness this year.”

Mr Anderson also revealed how the livestream from the nest has become an Internet sensation.

Now, with a “lockdown” audience, it’s already clocked up more than two million viewers regularly logging on the see how mum, dad and the three chicks are doing.

Mr Anderson said: “Our osprey nest livestream found a huge audience this summer, as people at home during lockdown craved contact with nature.”

The chicks are expected to fledge in a week or two.

The nest will remain their “home” until they migrate south towards the end of August.

Mr Anderson added: “Most Scottish ospreys fly overland down through England before crossing the Channel to France and on to Africa.

“There is every chance that Vera the osprey may fly over those white cliffs made so famous in the song by her namesake.”

And, here’s a link to the osprey cam livestream: