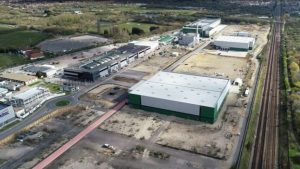 Credit Be First. The “Dagenwood” site

An east London film studio hoping to rival Hollywood has been given the go-ahead.

The 22-acre complex – already dubbed “Dagenwood” – is on a former pharmaceutical factory site.

It will be London’s biggest studios.

“This will mean thousands of jobs and educational opportunities for local people.

“Where once Dagenham was known for Fords and factories, we will be making films and a new bright new future for our borough.”

The project’s original backer – Pacifica Ventures – pulled out because of concerns about Brexit.

But the council pressed on.

Its investment arm, Be First, is in talks with potential joint venture partners.

So far, it has released £3.4 million to cover any pre-development costs.

The council estimates the studios will bring an initial 1,200 extra jobs to Barking and Dagenham.

“Barking and Dagenham is already a magnet for movie-makers.

“Two of the UK’s biggest features were filmed in Dagenham last year — Black Widow by Marvel and Morbius by Sony Pictures.

“As London is moving a lot of work east, we are finding more crew and production workers are actually living in east, south–east and north London areas, so we’re on their doorstep, which makes Dagenham Studios such a great geographical fit for the next generation of creatives.”