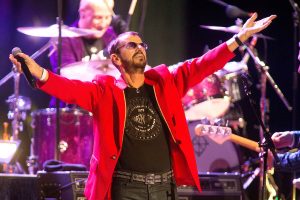 He said his passion for music and touring is as strong as ever.

In fact, he plans to tour more with his band the All-Starrs.

In an interview with the BBC, Sir Ringo – real name Richard Starkey – said:

“I’m playing actually more now than I ever did.

“With the All-Starrs we do one tour a year, now I’m doing two tours a year.

“And I have many blessings: family blessings, children blessings.

“I’ve got eight grandchildren now and a great-grandson.

“Life has been very kind to me.

“And we’re in a great business because we don’t have to retire; we can just go on as long as we can go on.”

Talking about his time with the most famous band in the world Ringo said:

“At the beginning, we wanted to make music, which we did.

“But we got so big the price to pay was that we couldn’t go to a restaurant.

“But now it’s eased off.

He added: “The Beatles are still relevant today to the next generation.

“If they’re interested in music they listen to our stuff.

“And to this day, thanks to Giles Martin (son of Beatles record producer George Martin), who’s remastering everything, I’m still playing it.”