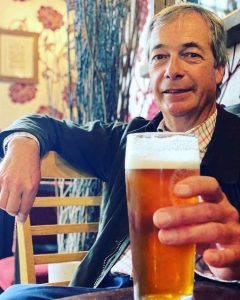 Brexit Party leader Nigel Farage has been reported to the police for allegedly breaking lockdown rules.

Mr Farage posted a picture on Twitter of him downing a pint in a pub.

However, the timing of his drink could land him in trouble.

Mr Farage had been at a Donald Trump rally in America a fortnight ago.

And, going to his local might have broken the 14-day quarantine law to self-isolate on returning to the UK.

He wrote: “I write to ask you to immediately investigate this issue, establish the timeline of events for Mr Farage’s return to the UK and establish whether Mr Farage was in breach of his quarantine.

“It is vital that lives are not put at risk by breaches of quarantine.

“I am copying this letter to the home secretary as I believe this case illustrates the difficulties that the police and Home Office will have in enforcing the quarantine rules as they are currently set out.”

Mr Farage later wrote on Twitter that he had quarantined for the required period and had given a negative Covid-19 test on his return.

However, the Department of Health is reported as saying a negative test does not mean you don’t have to self-isolate for two weeks.

The test can amount to a false negative.

Alexandra Phillips, who once worked as Mr Farage’s media adviser, defended her former boss on Twitter.

She said: “Dear Ed Davey, the police have better things to do, you sad little man.

“Getting an officer to go to Nigel’s house to tell him he shouldn’t have gone to the pub is a total waste of resources and makes you look like a pathetic, attention-seeking twerp.”