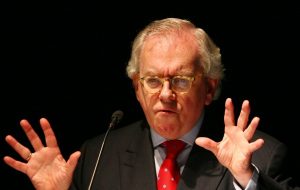 Dr David Starkey has resigned his honorary fellowship at a Cambridge college after making racist remarks about slavery and “blacks”.

The historian commented that slavery was not genocide because there are “so many damn blacks” still around.

The Master of Fitzwilliam College later contacted Dr Starkey who resigned at once from his position.

The university said his comments were “completely unacceptable”.

“Widely reported comments by historian David Starkey during a recent online interview are, in our view, completely unacceptable and do not reflect the values of our university and community.

“I would like to say sorry to colleagues and students who will have been offended and upset by such comments of this appalling nature, and in particular in these challenging and difficult times for us all.”

The call came after the 75-year-old Starkey made racist comments during an online interview with right wing commentator Darren Grimes for the YouTube channel Reasoned UK.

During the interview, Starkey said:

“Slavery was not genocide otherwise there wouldn’t be so many damn blacks in Africa or in Britain, would there?

“The honest teaching of the British Empire is to say quite simply, it is the first key stage of our globalisation.

“It is probably the most important moment in human history, and it is still with us.”

His remark prompted the former chancellor Sajid Javid to tweet:

“David Starkey’s racist comments (‘so many damn blacks’) are a reminder of the appalling views that still exist.”