Triple murder terror suspect appears at the the Old Bailey 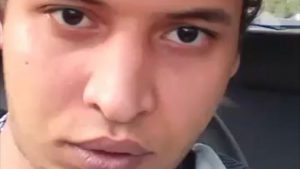 A man accused of an alleged terror attack in Reading that left three friends dead has appeared at the Old Bailey.

Khairi Saadallah, 25, appeared through a video link from Belmarsh Prison to the London court.

Saadallah is alleged to have killed the men in a stabbing spree in Forbury Gardens, Reading.

The victims were James Furlong, 36, David Wails, 49, and Joseph Ritchie-Bennett, 39.

Three other men sitting nearby – Stephen Young, and Patrick Edwards and Nishit Nisudan – were injured.

History teacher Mr Furlong and Mr Ritchie-Bennett, a US citizen, were stabbed once in the neck.

Mr Wails was stabbed once in the back.

They were all declared dead at the scene.

Saadallah confirmed his name, date of birth and his nationality as Libyan.

He was further remanded in custody during the 10-minute hearing.

There will be a preliminary hearing at the Old Bailey on the court’s terror list on July 10th.