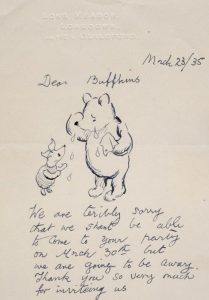 A letter of apology “written” by Winnie the Pooh to a small boy has sold for £12,500 at auction.

Pooh “wrote” to the lad who’d asked him to attend his birthday party.

The letter, written 85 years ago and addressed to “Buffkins”, came from Pooh illustrator E H Shephard.

It is littered with spelling mistakes but includes a pen and ink drawing of a tearful Pooh and his friend piglet.

It reads: “We are teribly sorry that we shant be able to come to your party on March 30th but we are going to be away.

“Thank you so much for inviteing us.”

“Buffkins” was the nickname of Harry Stopes-Roe – the son of birth control pioneer Marie Stopes.

Marie was a friend of the artist Shepard.

Auctioneer Chris Albury said he was asked by the Stopes-Roe family to go through “an attic full of papers”.

Mr Albury said there was “no mention of Shepard or Pooh”.

He added: “In one of the boxes there were these drawings and my heart stopped.