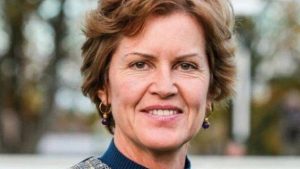 The wife of a former Conservative cabinet minister has been found dead at the family home.

Rose Paterson, 63, was discovered in woodland.

Today is her husband’s 64th birthday.

Owen Paterson said in a statement:

“It is with great sadness that I must inform you that my wife, Rose, has been found dead at our family home in Shropshire.

“Rose and I were married for 40 happy years. She was a wonderful, caring wife, mother, and grandmother.

“Her death has come as a terrible shock to us all. I would ask the media to respect the privacy of myself and my family at this extremely difficult time.”

Mrs Paterson was the daughter of the fourth Viscount Ridley.

She was also the chairman of Aintree Racecourse.

The Patersons married in 1980 and had two sons and a daughter.

Her husband is MP for North Shropshire and a former Northern Ireland Secretary.

“Owen rang me this morning to inform me that Rose had been found passed away at home.

“Obviously, Owen is very devastated and asked to be left in peace to come to terms with the situation.

“Rose was a very well-liked person. ”

“We can confirm the body of a woman has been found in woodland near Pant Lane in Sodylt in Ellesmere.

“The death is currently being treated as unexplained however at this stage there is believed to be no third party involvement.”