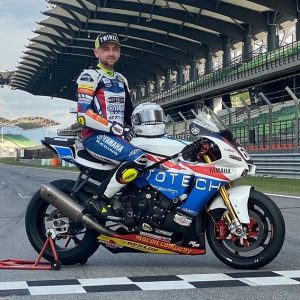 British Superbike rider Ben Godfrey has died after a collision at the Donington Park racetrack.

Ben collided with another biker during a No Limits Trackday at the circuit in Leicestershire.

He fell from his bike at Redgate Corner and died shortly afterwards from his injuries.

A Donington Park spokesperson said: “Ben fell from his machine during the second advanced group session.

“Tragically he suffered serious injuries and despite immediate medical assistance trackside, he succumbed to his injuries shortly after.”

Circuit Director Mark Neate said: “I am so desperately sad that Ben died from the injuries he sustained.

“Ben really was a fantastic young man and friends with so many people in the paddock, he was always smiling and had time for everyone.

“He was very excited for the start of the season and had taken part in many track days in the last month.

“Our thoughts are with his family, his partner Jordan and his team mates and friends.”

Ben started biking when he was five years old.

He said previously: “One of my dad’s friends had a mini moto and I had a go and to be fair I gelled with it straight away.”

He was due to appear in the Ducati Performance Tri-Options Cup.