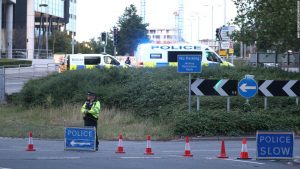 Eyewitnesses to the fatal stabbings in Reading have been urged not to share phone footage online.

Three people were killed in the attack in Forbury Gardens in the town centre.

Another three are in hospital with serious injuries.

Thames Valley Police arrested a 25-year-old man at the scene.

He is being held in custody on suspicion of murder.

The police have asked people who filmed the incident to come forward.

The footage could be helpful in the investigation.

However, Detective Chief Superintendent Ian Hunter said in a statement:

“We are … aware that the incident was captured on mobile phones and would like to hear from anyone who has video footage.

“Out of respect for those deceased and injured, along with their loved ones, please do not circulate this footage on social media – this will be incredibly distressing.”

The plea was echoed by politicians who took to social media.

“Please do not speculate or share footage online. Help the police. All information should be provided to @ThamesVP.”

“My thoughts are with all of those affected by the appalling incident in Reading and my thanks to the emergency services on the scene.”