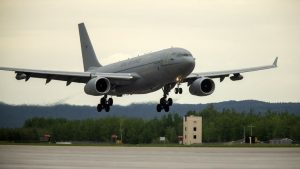 The military grey RAF jet used by Boris Johnson is to be repainted red, white and blue at a cost of £900,000.

The RAF Voyager – also used by the Royal Family – is being worked on in Cambridgeshire.

The Downing Street spokesman said the plane will have “national branding”.

He added: “The RAF Voyager used by the Royal Family and the Prime Minister is currently in Cambridgeshire for pre-planned repainting.

“This will mean that the plane can better represent the UK around the world with national branding similar to many other leader’s planes while also retaining its military air-to-air refuelling capability.

“That incorporates the cost of creating a design that will promote the UK around the world without compromising the plane’s vital military role.

“At every stage we have worked to ensure value for money for the UK taxpayer and all of the work has been undertaken in the UK, directly benefiting British suppliers.”