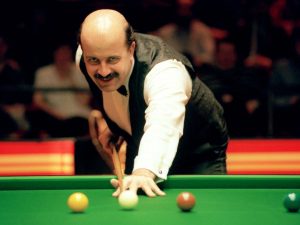 Thorne was a key player in the sport’s renaissance during the 1980s.

Although he never reached the pinnacle at the table, he was certainly one of the best known characters.

Thorne moved to Spain in March after revealing he had leukaemia.

He died in a Spanish hospital after suffering “septic shock” following respiratory failure.

Thorne was a close friend of Gary Lineker – both Leicester born lads.

Lineker said: “Deeply, deeply saddened to hear that my friend Willie Thorne has passed away.

“One of life’s great characters.

“A marvellous snooker player and a lovely man, who’s potted his final black much too soon. RIP Willie.”

She said: “It is with a very heavy and broken heart that I have to officially announce that at 1.55am this morning Willie Thorne lost his battle and passed away.

“Willie went into septic shock and was not responding to any treatment, so the decision was made by the hospital to turn off the machines.

“I was with him all the way to his end and reading out messages to him from people.

“He passed away very peacefully and without pain listening to his children saying they love him that gives me some comfort in this difficult time.”

The closest he came to greatness was in the 1985 UK Championship final.

He appeared on the 2007 show Strictly Come Dancing.