Statue to Scout founder Baden-Powell to be “kept safe” 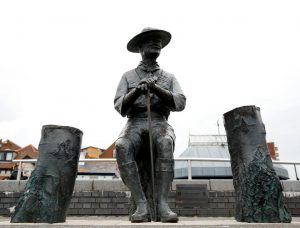 A statue to Scouts’ founder Robert Baden-Powell is to be moved for “safe-keeping”.

The memorial at Poole Quay in Dorset is the latest to be targeted for links to the past.

Council leaders have confirmed the statue will be moved “for now” to allow views to be “aired” while preventing “public disorder or anti-social behaviour”.

Baden-Powell looks out to Brownsea Island where he started the Scout movement.

“Whilst famed for the creation of the Scouts, we also recognise that there are some aspects of Robert Baden-Powell’s life that are considered less worthy of commemoration.

“Therefore, we are removing the statue so that we can properly involve all relevant communities and groups in discussions about its future, including whether a more educational presentation of his life in a different setting might be more appropriate.”

“Baden-Powell’s founding of the scouting movement can be no excuse for his documented homophobia, racism and enthusiastic support of Hitler.”

The Conservative MP for Poole, Sir Robert Syms, said he was “opposed to the permanent removal of the statue”.