Most litter dropped in England comes from McDonald’s, says report 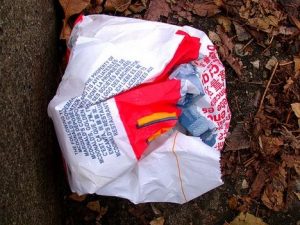 Discarded McDonald’s wrapping accounts for a half of all of England’s fast food litter.

Coca Cola makes up 20 per cent of thrown away drinks’ containers – followed by Red Bull and Pepsi.

The figures come from the charity Keep Britain Tidy.

The organisation picked up 75,551 items of rubbish; cigarette butts made up a third in the number of items dropped.

‘It’s clear that our food on-the-go culture of convenience comes with real consequences, with food and drink packaging polluting our environment, which in turn costs millions to clean up and harms native wildlife and domestic plants.”

The Department for Environment, Food and Rural Affairs commissioned the report.

For the full report go to: