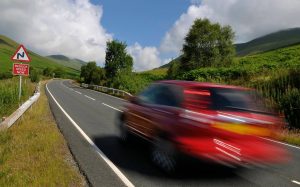 The police figures were obtained by the RAC under the Freedom of Information Act.

The motoring organisation asked all 30 forces for their speeding figures of more than 100 mph since lockdown started.

He warned drivers had “virtually no time to react should anything unexpected happen”.

He added: “Some drivers have taken advantage of quieter roads to speed excessively, putting the lives of others at risk at the worst possible time.

“It’s encouraging that so many police forces have taken firm action even during the lockdown, which sends a strong message to other would-be offenders.”

There were 17,363 speeding offences recorded in Britain on roads with a 30mph limit.

Mr Williams added: “The figures for speeding offences on 30mph roads are particularly worrying as far more people have been walking and cycling due to the lockdown.

“As some schools and nurseries in England begin to open their doors from this week, there will be even more pedestrians on the roads, so we urge every driver to obey the speed limit and keep all road users safe.”

Britain’s roads have seen a drop of 66% in traffic since lockdown was introduced.

It’s the quietest the country’s roads have been since the 1950s.

The Top Twenty speeds – limits in brackets – between March 23 and April 13 were:

Last week The London Globe reported on a motorist who posted a video of himself driving at 200 mph.

An Audi driver filmed himself hitting 200 mph down an empty “lockdown” motorway.

Police are now hunting the driver of the Audi RS6 going at almost three times the 70-mph limit.

At one point he is driving one-handed while filming on his mobile phone.

“We are aware of this horrific driving.

“I have tasked some investigative work to see if we can identify the car involved and the relevant location.

“If we do, we will seek the most robust action possible.”

The Audi’s engine is heard screaming towards the 200 mph

The speedometer shoots from 61mph to 116mph in just five seconds before climbing towards the 201mph mark.

The engine is heard screaming in the background as the car reaches its limits.

He was jailed for 28 months and banned from driving for 10 years.