“The Hodfather” – Nigel raises £1,600 on marathon run carrying a hod of bricks 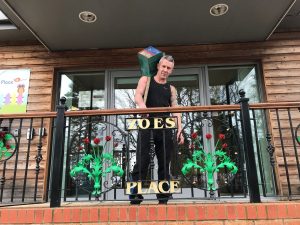 Building boss Nigel Howell – aka “The Hodfather” – has run a marathon while carrying a hod of bricks.

Nigel, 48, ran 70 laps around the streets near his home with an added four-stone of bricks.

It took the dad of three eight hours and six minutes to complete the distance – making him the first person to do with a hod, and setting a world record.

He said: “I’ve done some crazy things with the hod, but this was certainly the hardest one-day event I’ve ever done.”

Nigel, from Coventry in the West Midlands, collected donations of £1,600 for “Zoe’s Place”, a baby hospice.

Nigel added: “I’m lucky enough to have healthy children and I think what the charity do are amazing”.

A hod is a three-sided box with a long pole used to carry bricks and mortar.

It is slung over the shoulder.