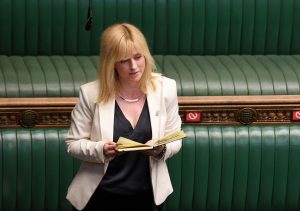 Labour whip Rosie Duffield has stood down from her frontbench role after flouting lockdown rules.

And, according to the Mail on Sunday, she did not deny he had visited her constituency home.

The “tryst” took place before meetings between people from different homes were relaxed.

In a statement, Ms Duffield said:

“My partner and I have been attempting to navigate a difficult personal situation as responsibly as possible.

“I apologise that during that process, we breached the guidelines.

“A relationship breakdown is difficult at the best of times, let alone during a pandemic.

“”I hope people can understand why I took the steps I did and know that I take responsibility for the breaches that occurred and for which I apologise.”

Ms Duffield has a majority of 1,836 in her Canterbury constituency.