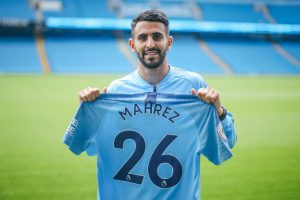 Thieves have stolen watches worth more than £450,000 from the home of Manchester City striker Riyad Mahrez.

The player had three time pieces taken in the raid – including a Richard Mille worth £230,000.

The other two watches were made by Rolex.

The Algerian player thought he was being watched by burglars and the robbery was carried out to order.

“accessed without authority using a fob which had general access throughout the building”.

“At around 5pm on Friday April 24, police were called to reports that four separate apartments had been burgled at a city centre block.”

Earlier this month Spurs’ striker Dele Alli was robbed at knifepoint when burglars broke into his home.

He too had a Richard Mille watch taken.

Security expert Alex Bomberg said players must be particularly careful to control what they post online.

He told The Telegraph: “The intelligence is there on social media.

“People will look at a footballer posting all of this stuff and they then become a challenge to the criminal community.”