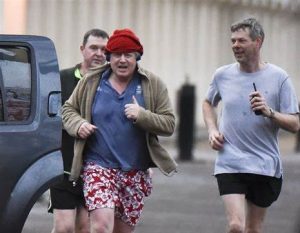 The Queen has allowed Prime Minister Boris Johnson to exercise in the grounds of Buckingham Palace.

The residence has a large garden and a tennis court.

The decision comes after security fears about Mr Johnson’s habit of running through London’s streets.

The PM was spotted arriving at a palace side entrance in a Range Rover.

He returned to Number 10 in a red tee-shirt, blue shorts, and trainers.

The Telegraph said a royal source confirmed the Queen’s permission – adding the offer had been made to earlier Prime Ministers.

A Government spokesperson said: “The Prime Minister has been exercising in the grounds of Buckingham Palace.

“It’s obviously important that the Prime Minister is able to take exercise.”