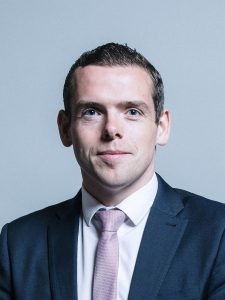 Mr Ross said claims by Dominic Cummings he had a valid reason to travel was “not shared by the vast majority of people who have done as the government asked”.

The resignation puts more pressure on Boris Johnson and his decision not to act against Mr Cummings for a series of alleged lockdown infractions.

In a letter to the PM Mr Ross – a Scotland Office junior minister – wrote:

“I have never met Dominic Cummings so my judgement on this matter has always been open and I accept his statement on Monday afternoon clarified the actions he took in what he felt were the best interests of his family.

“However, these were decisions many others felt were not available to them.

“As a father myself, my instinct is to always do what is best for my son and wife. We have been fortunate not to have caught this awful virus but if we did, we are prepared to follow the government advice and stay at home to contain this virus.

“While the intentions may have been well meaning, the reaction to this news shows that Mr Cummings interpretation of the government advice was not shared by the vast majority of people who have done as the government asked.

“I have constituents who didn’t get to say goodbye to loved ones; families who could not mourn together; people who didn’t visit sick relatives because they followed the guidance of the government.

“I cannot in good faith tell them they were all wrong and one senior adviser to the government was right.”

A Number 10 spokesman said Mr Johnson had thanked Mr Ross for his service and “regrets” his decision to quit.