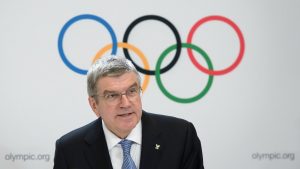 The Tokyo Olympic Games will be cancelled if they cannot be held next year.

This year’s Games were postponed for 12 months after the world went into a Covid-19 lockdown.

However, unless the virus is contained during that time the Olympics will be cancelled for 2021.

“Quite frankly, I have some understanding for this, because you can’t forever employ 3,000 or 5,000 people.

“You can’t every year change the entire sports schedule worldwide of all the major federations.

“You can’t have the athletes being in uncertainty.”

Mr Bach, speaking to the BBC, said the IOC was committed to holding the Games next year.

And that could mean quarantining athletes.

He said: “What could this mean for the life in an Olympic Village”

Cancelling the Games could cost the IOC more than £650 million.