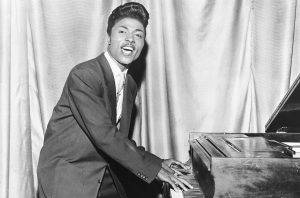 Rock and Roll icon Little Richard has died. He was aged 87.

His son Danny broke the news through the magazine Rolling Stone.

He said the cause of death was unknown.

“The genius who gave us A WOP BOP A LOO BOP A LOP BAM BOOM and plenty more is no more.

Little Richard’s exuberant showmanship, shrieks, unique voice and flamboyant dress style made him a pioneer in the fledgling days of Rock and Roll.

Many world-famous groups – including The Beatles and The Rolling Stones – owe a debt of showbiz gratitude to outrageous Richard.

The Stones opened shows for him

“There is no single phrase to describe his hold on the audience.”

Little Richard – real name Richard Wayne Penniman – told BBC Radio 4 in 1998 he was one of 12 children – and wanted attention.

“I did what I did because I wanted attention.

“When I started banging on the piano and screaming and singing, I got attention.”

His father was a preacher who also ran a nightclub.

His mother was a devout Baptist.

“I was born in the slums. My daddy sold whiskey, bootleg whiskey

“My daddy wanted seven boys, and I had spoiled it, because I was gay.”