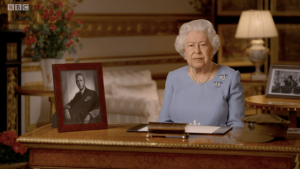 In a moving message to the nation the Queen told Britons “never give up, never despair”.

The Queen was delivering a special message to mark the 75th anniversary of VE Day.

She told how she “vividly remembered the jubilant scenes” as WWII ended.

And, she paid tribute to those who died for the freedom of others.

She said: “We should and will remember them.”

The broadcast, the Queen’s second within weeks, came from Windsor Castle.

She has been living and working in isolation since the outbreak of coronavirus.

The Queen said: “Today it may seem hard that we cannot mark this special anniversary as we would wish.

“Instead, we remember from our homes and our doorsteps.

“But our streets are not empty; they are filled with the love and the care that we have for each other.

“And when I look at our country today and see what we are willing to do to protect and support one another, I say with pride that we are still a nation those brave soldiers, sailors and airmen would recognise and admire.”