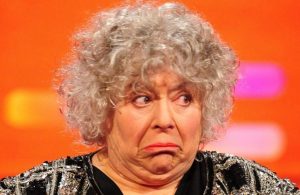 Ms Margolyes, 78, was appearing live on Channel 4’s comedy show The Last Leg Locked Down Under.

When asked about the Covid-19 pandemic and the Government’s handling of the crisis she launched into a tirade.

She said: “Appallingly, of course, appallingly.

“I had difficulty not wanting Boris Johnson to die. ‘

“I wanted him to die.

“Then I thought that will reflect badly on me and I don’t want to be the sort of person that wants people to die.

“So, then I wanted him to get better, which he did do, he did get better.

“But he didn’t get better as a human being. And I really would prefer that.

Her forthright comments prompted mixed reaction – some viewers were shocked, and others praised her frankness.

She has also won a BAFTA her role in Martin Scorsese’s The Age of Innocence.

She is renowned for her frank opinions.