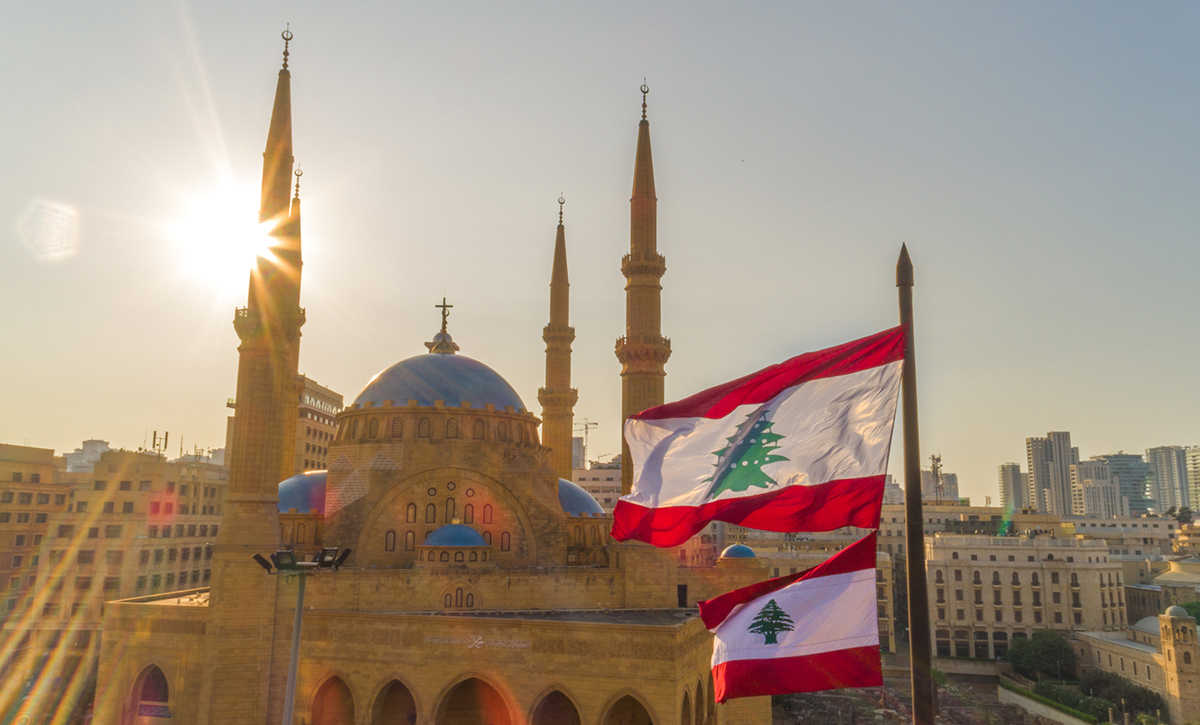 Beirut, Lebanon 2019 : drone shot of Martyr square, showing the Lebanese flag in foreground along with Mohammad Al Amine Mosque and st. George Church in the background, during the Lebanese revolution

Lebanese poet Khahil Gibran wrote in the 1920’s: “My Lebanon is a serene mountain sitting between the sea and the plains, like a poet between one eternity and another.” When I first met the Chair of the Foreign Affairs Committee of the Lebanese Parliament Yassine Jaber on a delegation to the Westminster Parliament in 2007, it seemed that after years of civil war, it was possible once more to dream of Lebanon’s development. – writes John Grogan 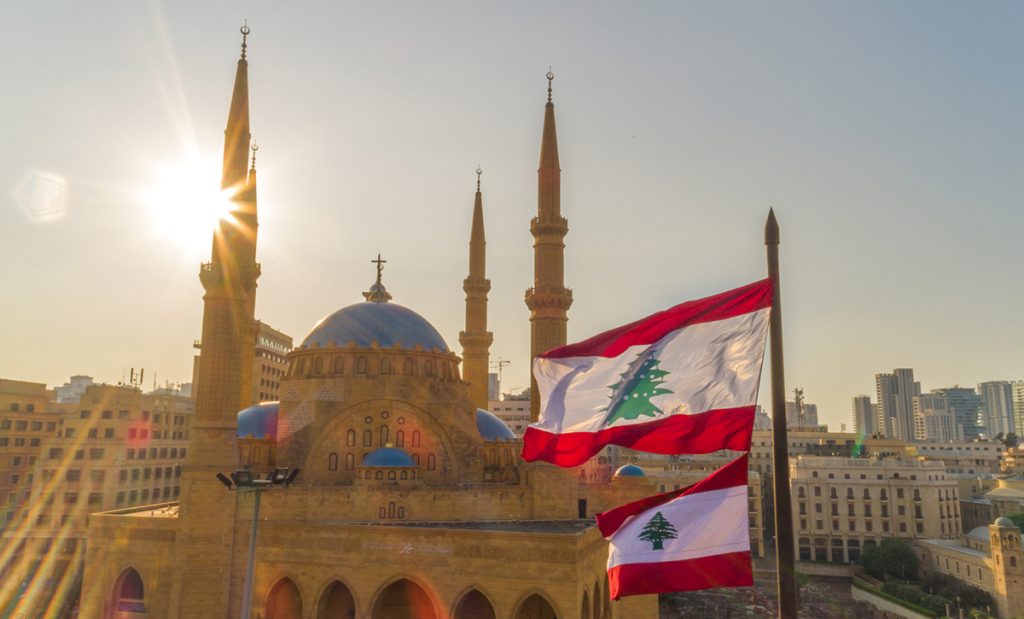 When I next met him late in 2019 leading another delegation to London it was against a background of a weakened and more divided nation counting the cost of playing host to at least one and a half million refugees from Syria. The economy is now in free fall with a massive decline in remittances and the value of the currency. Despite the threat of the Coronavirus the streets have resonated to the cries of the young demanding political and economic reform.

Lebanon’s Prime Minister Hassan Diab is hoping for a bailout from the International Monetary Fund (IMF). Diab took over after the power vacuum that followed Saad Hariri’s resignation in December and he is backed politically by Hezbollah and Gebran Bassil, President of the Free Patriotic Movement. Mr Diab hopes that foreign donors will release the $11 billion pledged at a Paris conference in 2018, which was conditional on economic reforms. The proposed deal is not dissimilar to previous promises of reform made by Lebanon. But can the IMF strike a deal with the Hezbollah-Bassil-Diab axis? The question has a particular resonance in the United Kingdom which last year prescribed the entirety of Hezbollah as a terrorist organisation ending the distinction between its political and military wings. Economic sanctions have followed .

While Lebanon has been in perpetual stalemate in terms of political power, the Iran-backed group Hezbollah has been amassing power and influence. That influence includes their relationship with the Prime Minister and is facilitated by Gebran Bassil. Hezbollah will have a voice on any IMF deal and they will have concerns. Reforms that end subsidies, build financial transparency and regulate how the banks finance the government will be damaging to Hezbollah’s control over much of the country and the accompanying money laundering . Equally, the IMF and foreign donors will have major concerns about essentially doing a deal with Hezbollah.

Jeffrey Feltman, who is the John C. Whitehead Visiting Fellow in International Diplomacy at the Brookings Institute, explains: “What distinguishes this plan from previous reform pitches is the fact that this government rests on the support of only one side of Lebanon’s political spectrum — Hezbollah and its allies. Previous proposed support packages for Lebanon were implicitly (and often not-so-implicitly) designed to strengthen the legitimate state institutions relative to non-state actors, especially Hezbollah. As this government relies exclusively on Hezbollah and its allies for its parliamentary support, that traditional justification for external assistance no longer works. The challenge for Diab will be to persuade donors that this plan does not solidify Hezbollah’s dominance in an increasingly fractured and dysfunctional, if not non-existent, state.”

Jeffrey Feltman goes on to add: “One fears that, in a déjà vu sense, this reform plan will face one of two unpalatable fates: Either it, like its many predecessors in Lebanon, will never be implemented, or — given the unprecedented dominance of Hezbollah and its allies — it will be implemented in a distorted, partisan way, even if that is not what Diab and his ministers intend. In either case, any interest by outside donors to help evaporates.” He also explains how Hezbollah has been attempting to establish full control over the country’s remaining hard currency, using the financial crisis to strengthen its parallel economy at a time when Lebanese banks are suffering a serious currency shortage.

The Lebanese Central Bank like the Lebanese Army has traditionally had a reputation of being above sectarianism but is now very much part of the political struggle.

Habib Ghadar of the Washington Institute for Near East Policy argues this struggle became visible in early April when Hezbollah tried to appoint some of its allies to key financial posts: namely, four open vice governor positions at the central bank, and top spots on the Banking Control Commission, which oversees the daily operations of private lenders. She notes that Hezbollah already controls the Finance Ministry and Interior Ministry, so infiltrating these banking institutions solidify its bid for financial control . She explains that the Hezbollah plan was disrupted when former prime minister Saad Hariri—apparently under pressure from new U.S. ambassador Dorothy Shea—threatened to pull his allies from parliament if the cabinet approved the appointments. Since then, Hezbollah has orchestrated a public campaign against the central bank governor with the apparent aim being to replace the struggling financial and banking system with their own parallel system based on a cash economy.

Ghaddar also alerts us that Hezbollah likely has its eye on assets that the Central Bank owns, including two potentially lucrative companies (Middle East Airlines and Casino Du Liban) and vast amounts of land, plus the control of the country’s foreign exchange reserves, including the $13 billion in gold stored at the Federal Reserve Bank of New York.The central bank and the banking system in general should of course not be above criticism particularly at a time of economic crisis. The lot of the Lebanese people is unlikely to be improved, however, by the replacement of central bank independence with that of Hezbollah control.

The IMF and foreign donors will have to tread very carefully as they decide their course with Lebanon. Of course some be tempted to just give the money and try to play their part in settling the turbulence that Lebanon is suffering. Equally there are so many demands on the funds of international donors that Lebanon’s Government cannot assume they will be top of the in-tray.

Back in December soon after leaving the UK MP Yassine Jaber accurately summed up the mood of the international community: “They have basically told us, ‘we still have you in mind, but please, for heaven’s sake, let us help you by you helping yourselves,’ ” he told Al Jazeera.

Jaber added that Lebanon is at a critical point where its politicians must regain the confidence of the people, bank depositors, investors and the international community, or the “uprising will become a revolution of the hungry and the unemployed, and they won’t leave anything untouched.”

If anything such feelings will have intensified over recent months. The IMF will be all too aware that Hezbollah and its allies are tightening their control and in such a context, promised reforms could be meaningless and Lebanon will continue its sad descent, even $11 billion dollars later. To give a future to their children and grandchildren, many of whom have been protesting on the street, Lebanese politicians need to step up to the mark and quickly.

The author, John Grogan, is a British Labour Party politician, who was the Member of Parliament for Selby between 1997 and 2010 and for Keighley between 2017 and 2019.
3