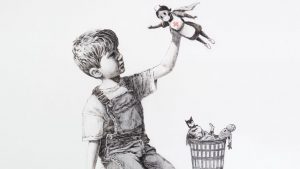 A Banksy drawing has appeared in a hospital corridor as a tribute to NHS staff.

The enigmatic artist left a note with his work.

It read: “Thanks for all you’re doing.

“I hope this brightens the place up a bit, even if it’s only black and white.”

The piece called “Game Changer” is in Southampton General Hospital.

It shows a young boy playing with a “super-hero” toy nurse.

Her arm is raised as if she’s using her superpowers to fly.

Meanwhile, in a wastepaper basket Batman and Superman lie untouched.

“Here at Southampton, our hospital family has been directly impacted with the tragic loss of much loved and respected members of staff and friends.

“The fact that Banksy has chosen us to recognise the outstanding contribution everyone in and with the NHS is making, in unprecedented times, is a huge honour.

“It will be really valued by everyone in the hospital as people get a moment in their busy lives to pause, reflect and appreciate this piece of art.”

A Banksy spokesman said the piece will go on public display and later be auctioned to raise money for NHS charities.